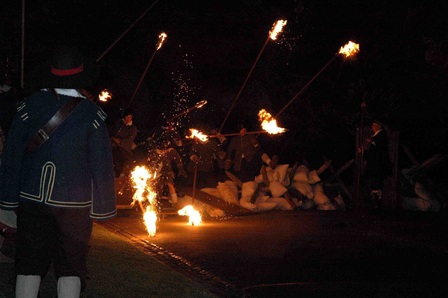 After Sir William Waller suffered a crushing defeat at the Battle of Roundway Down (on 13th July 1643), the Royalists looked to press home their advantage in the south-west. Two days after the battle, on the orders of the king, Prince Rupert led the Oxford Army to besiege Bristol (Lunsford's regiment were part of the Oxford army, under the command of Henry Lunsford). He met up with the Cornish army under the command of his brother Maurice and Lord Hopton.

Bristol's defences had been prepared over the preceding few months and were almost complete. They included a ditch and a wall which linked a number of forts and towers, including the original city wall. The city was well supplied with artillery and ammunition. It was garrisoned by a force of about 2000 to 2500 men under the command of Colonel Nathaniel Fiennes.

On 24th the Cornish crossed Keynsham Bridge and surrounded the south side of the city. The Oxford Army did likewise to the North. Colonel Fiennes was given the chance to surrender, but declined. Part of the Bluecoats, attached to Belaysye’s Tertio, were sent to occupy two houses and line a hedgerow near Alderman Jones’s house. A site for a battery of cannon was built, but during the skirmish with the city defenders Captain Neville of Lunsford’s was shot dead.

During the day of the 25th various other batteries of cannon  were built around the city, and the defenders received a good pounding.

An all-out assault was planned for the 26th. The password was ‘Oxford’, and the field-sign sprigs of leaves or other ‘green colours’.  Additionally, attackers were not to wear neck-cloths or collars. False attacks were made all night of the 25th/26th to wear down the resolve of the defenders. As morning broke on the 26th,  the Cornish attacked the south side of the city (prematurely).

Once Rupert realised his brother Maurice had attacked, he ordered the signal fired and the Oxford Army plunged in. Herbert Lunsford, leading the Lord General’s regiment, attacked the main line, but finding it too well defended shifted his attack to near Priors Hill Fort. He found a ladder and was leading his men over when he fell back winded, unable to safely get to the top of  the barricades. After an hour and a half, the tertio dropped back, unable to make ground.

Further along the line, Henry Lunsford and the regiment were attacking. Lieut-Col Moyle had been detached to serve as Brigade Major (senior staff officer) to Belasyse, the tertio commander, and he was in the thick of the action co-ordinating the tertio’s attack, and ensuring that The Bluecoats, Stradling’s, Bellasyse’s and Lloyd’s regiments attacked together. There were no proper ladders or fascines for the ditch, and they found it impossible to get a hold. Rupert galloped up, and directed the retreating regiments further up the line to a breach made by Wentworth’s men. His horse had its eye shot out and he joined Lunsford’s men on foot. Bellasyse’s tertio were in! Rupert waved the troops on and went to find a fresh horse. 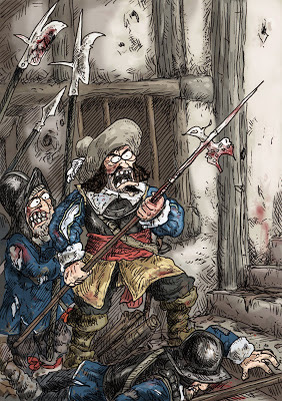 They spread out towards the quay. Sir Arthur Aston’s Horse joined them, and as they got to the Frome gate the defenders sallied out to attack them with horse and foot, and sharpshooters from the windows of the bastion. The Royalist horse charged several times, but the weight of numbers and positioning of the Parliamentarians forced the Royalist foot back up the Christmas Steps. There was extremely heavy and savage fighting, and Colonel Henry Lunsford, was shot through the heart. Always at the front of the action, he had been wounded in the arm the day before. His men were devastated. His brother, Herbert, leading the LG’s regiment, now arrived with reinforcements and forced the enemy back down the steps and through the gates. It was at this point that Nathaniel Moyle, 2-i-c of The Bluecoats, directing the tertio, was shot through the bladder; he was carried unconscious from the battle and died the next day. Thus Lunsford’s Bluecoats had lost their Colonel and Lieut-Colonel in the space of half an hour. One can only imagine Herbert’s feelings as he saw his brother and friend carried away.

At this point Rupert arrived back at the gate on a fresh horse. The royalist troops continued to breach the enemy line, and isolate the forts. By 5 pm the Parliamentarians had stopped firing, and by 10 pm the surrender had been negotiated. Fiennes surrendered at 9am  the next day, but most of the parliamentarian troops had left earlier at 7am to avoid their belongings being plundered. After marching out of the city and leaving it to Rupert, Fiennes was tried and found guilty of giving in to easily by Parliament. He was sentenced to death, but his father, Lord Saye and Sele, ensured by influence that it was never carried out- although Fiennes never held a command again. 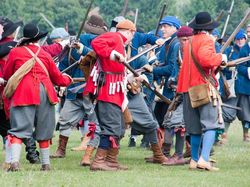 Lunsford’s Bluecoats were sorely damaged. They had lost their CO, 2-i-c, 2 Captains (Neville and Ventris) and many troops. Rupert,who had been a friend of Henry Lunsford, spoke of how bravely the Bluecoats had fought, and met with Colonel Wentworth, and his 2-i-c, John Russell. Rupert adopted the Bluecoats as his own regiment, and Russell was persuaded to take the role of Lieut-Colonel of the regiment –although in all but name he was the CO for the rest of the war. The regiment stayed at garrison in Bristol to rebuild its strength and recruit, and as such did not see major action until the following year. Henry Lunsford was commemorated in the years that followed. The Christmas Steps were known as Lunsford’s Stairs for many years.

Written by Andy George for the regimental magazine.