The regiment was formed in late 1643 from professional soldiers raised in Holland under direct contract to Prince Rupert. The contract was with a Dutch gun-runner, John Van Haesdonck, to provide 'more or less 200 soldiers, such as are experienced and practised'. Most sources agree that the regiment's companies were probably attached to various regiments during the next few months, more than likely with the Bluecoats as the Prince generally kept his own personal regiments together.

The Firelocks were probably stationed in the Shrewsbury garrison during 1644, where it was reinforced from various companies of firelocks which arrived from Ireland. This dramatically increased the number of Irish soldiers within the regiment, particularly in the officer contingent.

The regiment was present at the assault on Abingdon in January 1645, which was unsuccessful. Five of the company who were captured by Parliamentarian forces were hanged, as per the Parliament 'Ordinance of No Quarter to the Irish' from November 1644 which stated '...no quarter shall be given hereafter to any Irishman, nor any Papist whatsoever born in Ireland, who shall be taken in hostility against the Parliament...'

Firelocks in the 17th Century 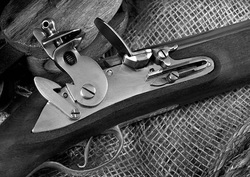 The 'Firelock' is actually the name given to the matchless muskets used in the 17th Century through until the percussion muskets of the Crimean War. In England during the civil wars they were often called 'the snaphaunce'; various designs of matchless ignition were used, including 'dog-lock', 'English lock' and 'French lock'.  Whatever the name, the locks worked by the striking of a flint against a piece of steel to produce a spark, which ignited the priming and this the charge.

The main advantages over the matchlock were variously given as speed of firing, safety around powder and secrecy at night. The claim that they fired better in the wet has been overturned many times by anyone who has used one on a wet day; the fact that there is no match burning down and needing replacing is obvious.

From this, the name of the troops using the matchless guns became 'Firelocks'.

Captain Sandford's Firelocks were notorious as hard-fighting killers; his men stormed Beeston Castle, and before he attacked Hawarden Castle he wrote to the garrison, warning them; 'I vow all hopes of relief are taken from you, and our intents are not to starve you, but to batter and storm you, and then hang you all....behold the messengers of death, Sandford and his firelocks, who neither use to give, nor take, quarter.'
And to the inhabitants of Nantwich - 'I am now resolved to batter, burn and storm you.....My firelocks, you know, have done strange feats by night, and we shall not fail in our visits to you.'

There are recorded instances of Firelocks using grenades (called grenadoes) as part of their assault role; the use of Rupert's Firelocks to lead the assault on Leicester shows you how vital their role was.

Additionally, Dutch protocol was to issue cartridge boxes with Firelocks, and belts of bandoliers with matchlocks. As the regiment was initially recruited in Holland, there is good evidence to suggest that many of Rupert's Firelocks would have used cartridge boxes or bags instead of the bandolier.