Moving Up The Ranks

As we accurately portray a 17th century regiment, we have an authentic command structure, running from the lowliest soldier to the commander of the regiment. There is the opportunity, should you wish, to advance through the ranks - every officer within the regiment started out as a pikeman or musketeer - and there are also several administrative roles (which, in some cases, are linked to rank). These roles and ranks are outlined below.

FILE LEADER: This is a mainly administrative role. A file leader is the first point of contact for a file of musketeers, pikemen, drummers or pioneers (usually about 4-5 people) to aid in communication regarding forthcoming events and other matters. On the field, as experienced members, they may also be asked to act as a Corporal from time to time.

ADJUTANT: The adjutant is an important administrative position, responsible for collecting membership fees, liaising with the membership secretary of the Sealed Knot and ensuring that all members receive their membership cards at the start of each season. They also fulfil many other tasks to maintain the smooth running of the regiment off of the field.

CO: The CO (Commanding Officer) of the regiment holds a rank (usually Major or Lieutenant-Colonel) and commands the troops on the field. He is ultimately responsible for the appearance and behaviour of the regiment and for the well-being of its members. 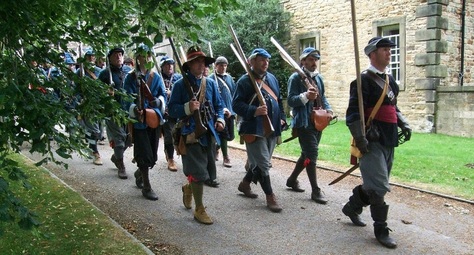 CORPORAL: The lowest ranking NCO (Non-Commissioned Officer), a corporal is responsible for a small section of soldiers (pikemen, musketeers, drummers or pioneers). He can issue commands and a corporal will usually act as a "right-hand marker" when the regiment forms into divisions - effectively the corner-stone of the formation. They may, from time to time, take a temporary rank as Acting Sergeant. Off the field they are responsible for instructing their section in drill and checking their kit. On the field they assist the sergeants in forming the troops and encouraging them during battle.

SERGEANT: Sergeants are the backbone of the divisions and their main task is to maintain discipline in the ranks. They are the link between the officers of the division and the rank and file. During drill and battle they are responsible for ensuring that the orders from above are relayed clearly to the soldiers and for the division forming up and manoeuvring smartly and efficiently. Whatever their arm of service they carry a halberd (unless they are a drummer or pioneer).

ELDER SERGEANT: The Elder Sergeant is the senior sergeant of the regiment and is responsible for matters of drill and discipline. He or she may sometimes be asked to temporarily act up as Ensign.

ENSIGN: This is the junior commissioned officer. On the battlefield he does not issue orders but has a pivotal role in bearing the colours (i.e. the flag) of the regiment. Before engagement he may be called upon to flourish his colour to show the enemy who they are up against and in the chaos of battle he serves as a rallying point.

LIEUTENANT: A Lieutenant is generally the second in command of a division although he may sometimes command a division (the regiment is broken up into divisions of pike and musket). He will carry a pole-arm called a partisan.

MAJOR: The regiment's CO or 2IC will be a Major. As CO he will command the regiment on the field, taking his orders from his brigade commander or, as 2IC, he will help the lieutenant-colonel (CO) in the running of the regiment. He carries a half-pike.

LIEUTENANT-COLONEL: The highest regimental rank. The next step from here is onto the brigade staff and, maybe one day, Lord General of the Royalist Army!